About eleven kilometres from Puerto del Rosario along the FV-20 road, there is a village called Casillas del Angel, which began to develop through the agriculture and farming activity in the 17thand 18th Centuries, as can be seen at Ángel de la Guarda Chapel, which gave this village its name. It has been a parish church since 1790, set up under the name of Santa Ana.
It was a municipal district between 1812 and 1926, when it was dissolved and attached to Puerto de Cabras. 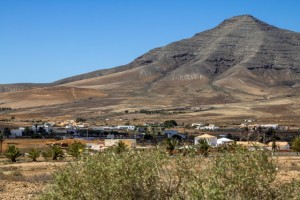 Not to be missed, 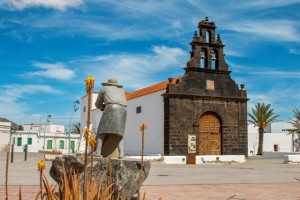 Santa Ana Church was built in the second half of the 18th Century with the expectation that it would be elevated to become a parish church. The construction work finished in 1781 with the unusual façade in black stone quarried from the volcanoes in the north of the island. It holds sculptures and paintings of note – the polychrome altarpiece and pulpit in particular, as well as the ensemble of Santa Ana and the Virgin Mary as a Child.

A house that belonged to one of the most important aristocratic families in the location. The internal L-shaped courtyard and the balcony in the Canarian style particularly stand out. Casillas del Angel.